How To Be Unstoppable In Business

Join my free FB community to connect with me and other fabulous solopreneurs to help you Rock Your Fabulous Biz.

Are limiting beliefs holding you back? I know that they have with my clients, and they certainly have with me. The thing is they can be changed SO quickly, yet we just drag them around with us everywhere we go, and they stop us from achieving all we set out to achieve.

We are great at building evidence to reinforce our negative beliefs. “Oh that video went wrong”, so that might become “I’m rubbish at videos”, or “I’ve only got 1 like on my Facebook post”, so that might become “I’m rubbish at writing Facebook posts, everyone else gets loads more likes than me”. When you say it out loud, it’s almost funny, isn’t it?! It’s like the little child that gets overlooked at school and doesn’t get the invite to a party. Let’s not make it a thing. Just because you don’t get 200 likes doesn’t you’re your post is rubbish, it may not have even been seen, which going by the way algorithms work on Facebook, is a much more likely reason! Challenge what you’re saying to yourself.

You’ll often hear people say, they’re not good at something, and then they will share examples of when it’s all gone wrong and how they’re not good at it. It’s time to start finding evidence to the contrary, to notice all of the things you are good at.

I remember when I had just finished my coaching training, and we’d talked about limiting beliefs and how you could get rid of them and I thought it was some magical thing that I had to try and figure out. I turned the release of limiting beliefs into a limiting belief that I couldn’t help my clients clear them! Hilarious!

You have to catch yourself saying these limiting beliefs, or even thinking them, and then start to change them through challenge.

Limiting beliefs are based in fear, we use them to protect ourselves but they don’t serve us. They just stand in our way and stop us from moving forward.

Sometimes all it takes is a quick reframe, other times it’s worth working with a coach or someone to help you recognise what you’re saying. 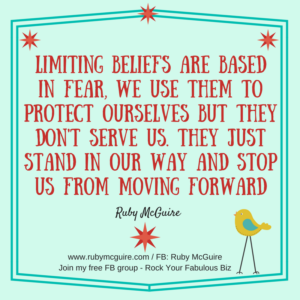 Let’s challenge a couple of common limiting beliefs now by doing a bit of reframing.

“I don’t deserve it”

I may have shared this already but I remember having a conversation with a friend a few years ago. She was living in rented accommodation and wanted her own little house. She told me she couldn’t get a mortgage. So I said, ‘How do you know? You haven’t tried!’ She decided to go and find out if she could get a mortgage, and has been living in her beautiful little cottage for many, many years now. All because she changed what she believed, and worked on the how!

Now, simply doing this on its own might not be enough. You might need to do a bit more clearing which is why I am passionate about NLP. When I was at my Practitioner training we had to write a list of limiting beliefs. Despite all of the mindset work I’ve done I still came up with a hefty list. At the end of the training, though, I would say 95% of those had gone. NLP is amazing at helping you release all of the unwanted brain rubbish! The rest I’ve worked on since. 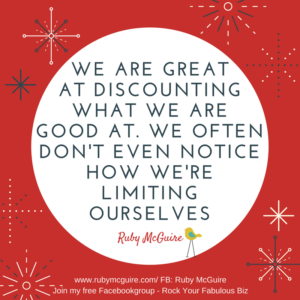 We are like detectives, we get something wrong and then start trying to prove that we are rubbish at something, what is that all about? What if you CHOOSE to be good at something instead, and then find out all the ways you can improve at it. Going forward, gather that evidence instead, it’s much more empowering. That would be way more fun, wouldn’t it?

My work with service-based solopreneurs on being visible in their businesses includes lots of mindset work.

We are great at discounting what we are good at. We often don’t even notice how we’re limiting ourselves. 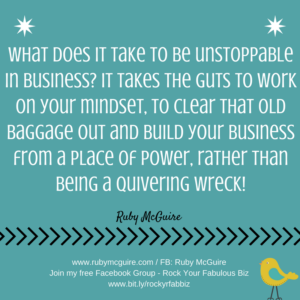 What does it take to be unstoppable in business? It takes the guts to work on your mindset, to clear that old baggage out and build your business from a place of power, rather than being a quivering wreck!

Know this… Absolutely anything is possible for you. Working on your mindset will help you get out of your own way and start to believe that. 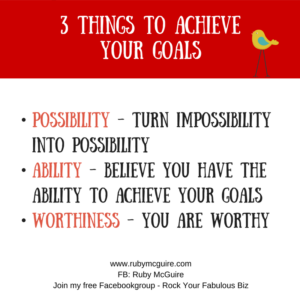 I read somewhere once that you need 3 things to achieve your goals. Sadly, I can’t find the original source, so if you know then please share with me as I like to credit people’s work.

Your call to action this week: Notice what you’re telling yourself and start to reframe it. If you want more help then get in touch and let’s get these pesky limiting beliefs cleared so that you can start living the life you’re meant to be living. There are lots of different ways to do it, and having done NLP training I now know there is more than one way to skin a cat as they say (as in lots of different ways to solve problems). The first step is awareness.

Change CAN happen in an instant. We think it has to take time. It doesn’t! You can decide today to believe you’re unstoppable and can achieve all you desire. Will you? 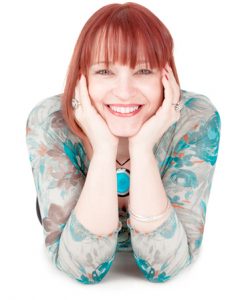